Would you like to switch to the accessible version of this site?

Don't need the accessible version of this site?

Here is Roxy – a young female boxer that came in to the clinic in mid-February with a history of eating bark, vomiting and depression. Her history, her physical exam, bloodwork and her xrays supported the possibility of a bowel impaction/obstruction, so off to surgery we went.

You can see from this pre-op photo that she is definitely not her bouncy-boxer self. We have just placed an IV catheter so she’s ready to be hooked up to IV fluids and given anesthesia. 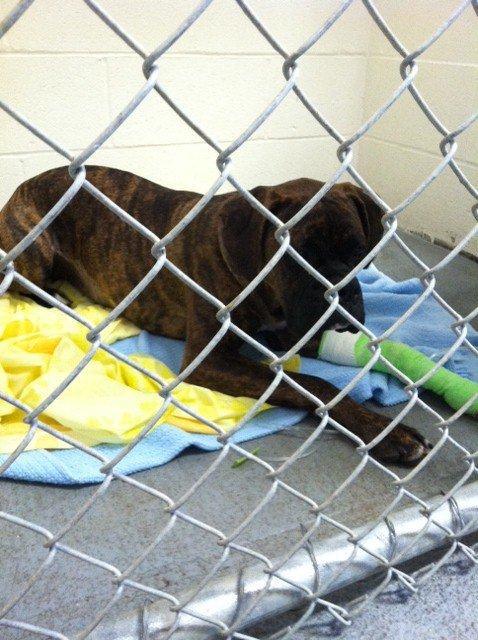 Here’s Roxy’s abdominal radiograph; she’s on her side, head to the left. You can see her ribcage on the left and spine across the top in order to get some orientation. The BIG dark area farthest to the left is her chest cavity; the large upright oval is her empty stomach, and to the right of that, the “lots of little black areas all wadded up” are her gas-filled intestines. It’s that particular gas pattern that pretty much confirmed that we needed to get her to surgery as soon as possible. 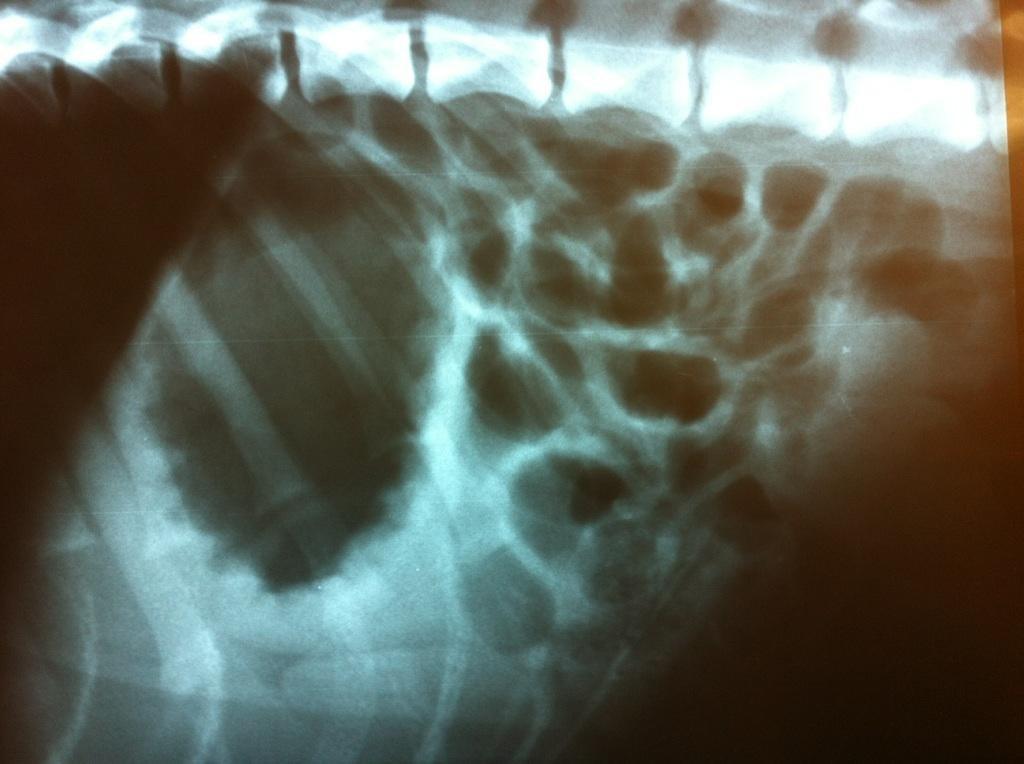 Here we are mid-surgery. Assisting on the right is tech-in-training Chelsie Wise; she had the all-important job of holding the area of bowel containing the obstruction so that nothing from the lumen of the bowel leaked into and contaminated the surgical site. Yours Truly on the left pulling bits of organic matter out of the small intestine (the ileum, if you want me to be specific). I had to incise the bowel in 2 areas to remove all the junk. 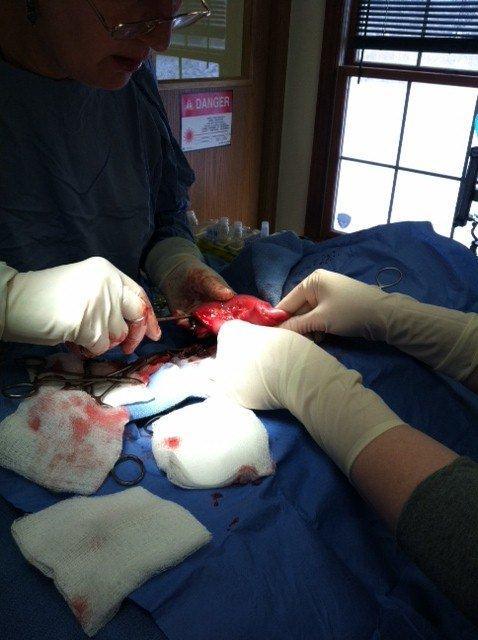 And…here’s the stuff – at least, some of it, already stowed away into a baggie to show Roxie’s owners. 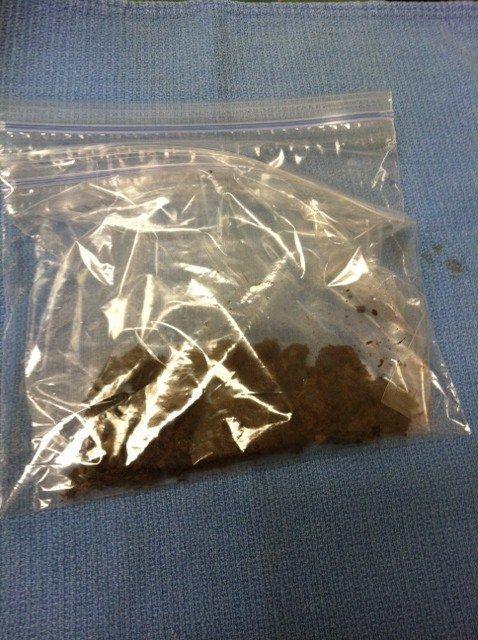 Here’s Roxy one day post-op – feeling a little puny, still, but with a normal temperature, normal white blood cell count and the beginnings of an appetite. She wasn’t quite ready to smile for the camera, though technician Cassie Bryant is doing her best… 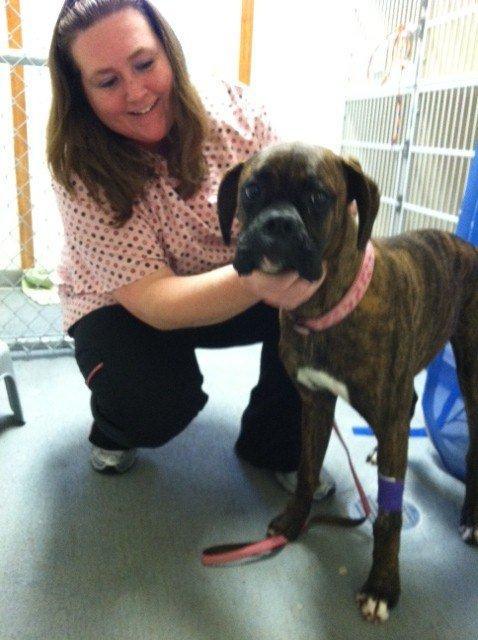 OK, MUCH better! 10 days post-op, here’s that big old boxer grin (it was tough to get her to hold still long enough for a good photo – she’s actually much prettier than this, but I liked the funny angle!). 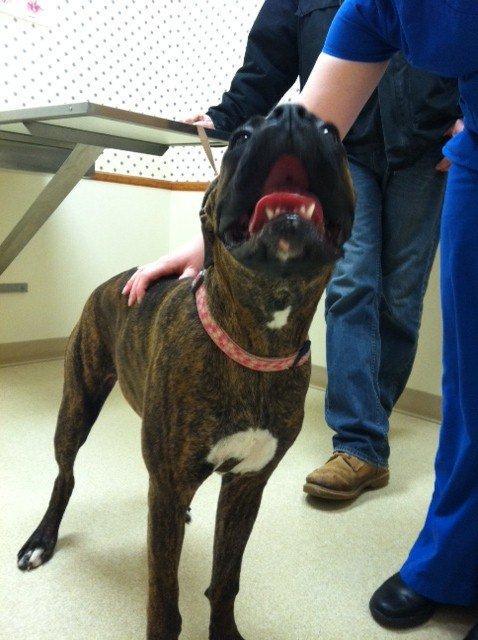 Find us on the map

Human vs Pet Medications: Why You Should Never Share Medicine with Your Pets

Could your medications harm your pets? ...

Does your pet dread veterinary visits? ...

Signs on Heatstroke: Keep Your Pets Safe This Summer

Do you know how to protect your pet from heatstroke? ...

Why Heartworm Protection Is Necessary for All Pets

Is your pet protected against heartworm? ...

Not sure which house plants are safe for your cat? Take a look at our list. ...

Has scratching become your cat's favorite activity? A skin allergy may be to blame. ...

The grieving process includes accepting the reality of your loss, accepting that the loss and accompanying feelings are painful, and adjusting to your new life that no longer includes your pet. How do I tell my family? Family members usually are already aware of a pet's problems. However, you should ...

Every day, Cindy Fleischner lines up her crew of cuddly canines for breakfast. As the four other dogs eat, Cindy pulls Katy, her 12 year old Shepherd mix aside for a peanut butter treat. Katy is battling lymphoma and this treat hides her daily dose of chemotherapy drugs. Katy is not alone in this war. ...

Lengthy bouts of vomiting and diarrhea can be a sign that your pet has gastroenteritis, a common condition that occurs when the lining of the stomach and intestines becomes irritated. Since frequent diarrhea and vomiting can lead to dehydration, a visit to the veterinarian is a good idea if you notice ...

What You Need to Know About Antibiotics

Using antibiotics incorrectly may harm, rather than help, your pet. ...

Read What Our Clients Say