Would you like to switch to the accessible version of this site?

Don't need the accessible version of this site?

This is Annie – a very sweet, eleven-year old bloodhound. Her front end is just lovely… 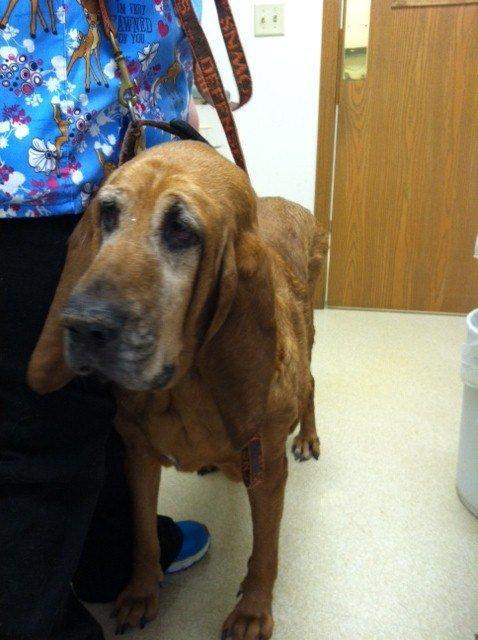 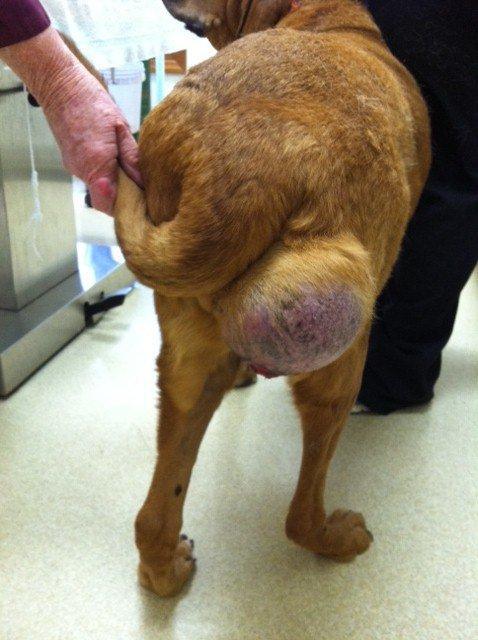 Annie’s had this tumor for about 2 years; her owners were told elsewhere “not to bother” with it; however, it had grown to the point where it was open and draining. Not only is this messy, but come springtime, it would be a magnet for flies. Annie is a very spry senior citizen – her quality of life is great, as was her pre-operative bloodwork, so the decision was made to try and remove or at least “debulk” the mass. 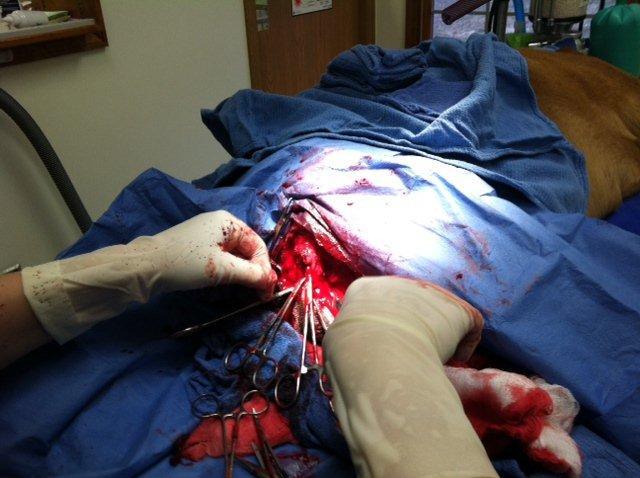 If it’s a big ol’ tumor..then when it’s gone there will be a big ol’ hole. Each of those metal hemostats is clamping off a blood vessel that was going to the tumor. Nothin’ left to do now but busy-work – each vessel gets ligated (tied off) with suture so it won’t continue to bleed. The next task is to close the wound. 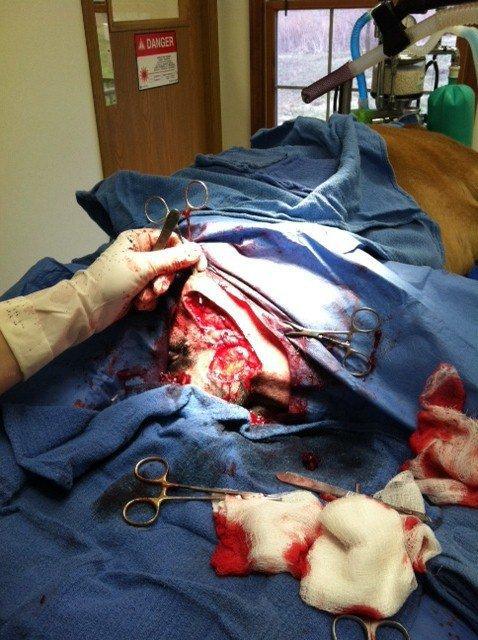 In case you’re wondering, usually somewhere about this point in a big tumor surgery I’m going “holy smokes, NOW WHAT?” These gaping holes can be a little intimidating!

“Nature hates a dead space” we were always told in vet school, which means that if there’s a large enough cavity, it’ll fill with…something. Usually fluid. So to prevent the formation of a big serum pocket ( a seroma), I willl place a penrose drain once the vessels are ligated. This will allow any fliud to drain out instead of accumulating. The next step is to suture the subcutaneous tissue together and make the hole a little smaller….I hope!

Yeah….that’s more like it. The hole is shaped like a golf club, with the club part facing left. This means I’ll have an L-shaped incision instead of a straight one, but that’s all right. The forceps in my left hand will grab the penrose drain and pull it out the top hole, and I’ll make an identical hole below the incision for the bottom of the drain. Feeling a little better about that hole at this point but still concerned about how much tension will be placed on the skin sutures. But here goes… 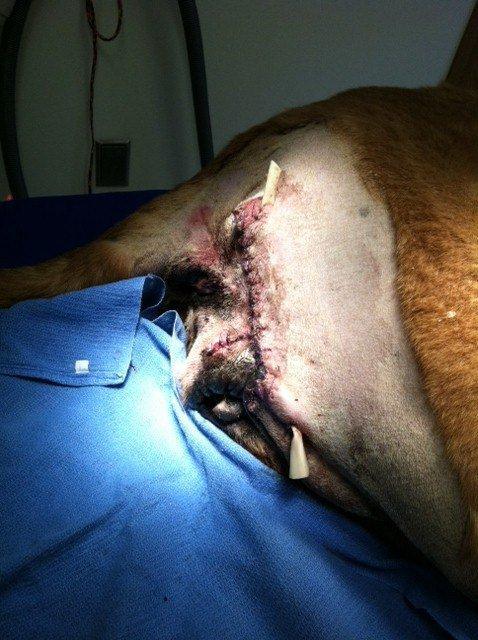 Uh-huh… Pretty happy with this. The skin is not too tight, and closes neatly. So Annie goes home on plenty of pain meds; she also will get a dose of antibiotics, due to the fact that the base of the tumor had already opened and her white blood cells were higher than normal on her pre-op bloodwork indicating some degree of infection.

Three days post op, the owners report that she is definitely feeling better. We will remove the drain tomorrow and the sutures in another week or so.

As it happens I am making a daily house-call to help the owners with their other bloodhound, who’s recovering from back surgery, so I am able to check on Annie’s progress every day as well.

So how about some post-op thoughts? Well…the tumor was wrestled into a container and sent off to the lab for a biopsy; provided it doesn’t leap out and attack some helpless pathologist, I’m guessing it will be identified as belonging to a family of soft tissue sarcomas – none of which are good news – so I’m keeping my fingers crossed that I’m wrong (In some cases I LOVE to be wrong!). It is likely that I didn’t achieve clean surgical margins (in other words, I probably didn’t “get it all”) because these types of tumors often have microscopic streamers of cancerous tissue coming off the main body of the tumor. However, some of them are pretty slow growers if they do recur, so at least between now and the time we have to deal with it again, Annie should have some months (and hopefully years) of time when she can sit comfortably without a draining mass following her around.

Find us on the map

Human vs Pet Medications: Why You Should Never Share Medicine with Your Pets

Could your medications harm your pets? ...

Does your pet dread veterinary visits? ...

Signs on Heatstroke: Keep Your Pets Safe This Summer

Do you know how to protect your pet from heatstroke? ...

Why Heartworm Protection Is Necessary for All Pets

Is your pet protected against heartworm? ...

Not sure which house plants are safe for your cat? Take a look at our list. ...

Has scratching become your cat's favorite activity? A skin allergy may be to blame. ...

The grieving process includes accepting the reality of your loss, accepting that the loss and accompanying feelings are painful, and adjusting to your new life that no longer includes your pet. How do I tell my family? Family members usually are already aware of a pet's problems. However, you should ...

Every day, Cindy Fleischner lines up her crew of cuddly canines for breakfast. As the four other dogs eat, Cindy pulls Katy, her 12 year old Shepherd mix aside for a peanut butter treat. Katy is battling lymphoma and this treat hides her daily dose of chemotherapy drugs. Katy is not alone in this war. ...

Lengthy bouts of vomiting and diarrhea can be a sign that your pet has gastroenteritis, a common condition that occurs when the lining of the stomach and intestines becomes irritated. Since frequent diarrhea and vomiting can lead to dehydration, a visit to the veterinarian is a good idea if you notice ...

What You Need to Know About Antibiotics

Using antibiotics incorrectly may harm, rather than help, your pet. ...

Read What Our Clients Say